… which is apparently the primary resource on Hethert-Nut. So I’ve ordered a book by Erik Hornung which should have a solid chunk of information about it.

For now, I get, from here (which I do not claim to be correct; I am doing preliminary research here):

“It is my mother the Great Wild Cow, long of plumes, bright of head-cloth, pendulous of breasts, who has lifted me up to the sky, not having left me on Earth, among the gods who have power.” 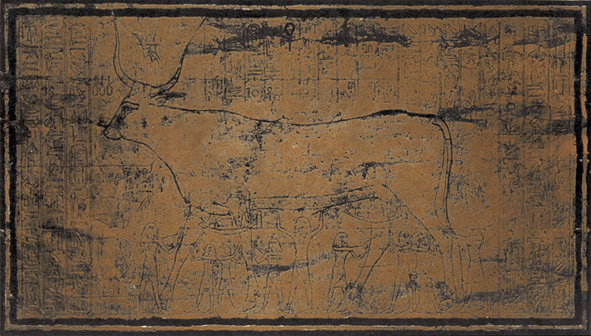 This spell is to be recited over the (picture of) a cow, with “the Infinite Ones who are” (inscribed) on her chest, and over whose back is (inscribed) “the Infinite Ones who are”. Whose four hoofs are filled out in paint and upon whose belly are nine stars, issuing from its hindquarters in front of its hind legs, while beneath its belly stands Shu, painted in yellow ocher, his arms support these stars, and inscribed with his name between them, which says “Shu is himself”.

A barque, on which are a steering-oar and a shrine with a Solar disk over it and Re in it, is in front of Shu, close to his hand, while another version (of a barque) is behind him, close to his (other) hand. Her two udders are placed in the middle of her left leg, one half of them being drawn in paint in the middle of this hind leg with the following words outside in retrograde : “I am who I am. I will not let them take action.” What is (written) beneath the barque that is in front is : “You shall not grow weary, my son.” – in retrograde, and as follows : “Your condition is like that of one who lives forever.” and as follows : “Your son is in me. Life, prosperity and health be for your nose!”

A magician, his head being purified, should make a female figure, standing to his South, and draw a goddess upon her, and in the middle of her, a snake standing erect upon its tail, with her hand upon its body and its tail upon the ground.

(He should say):
“O You, to whom Thoth gives praise, while the dignity of heaven is upon You and toward whom Shu extends his arms, may You save me from those two great and mighty gods who dwell in the East of the sky, who guard heaven, who guard Earth, and who are with enduring mysteries.”

Then they must say:
“How great he is when he goes forth to see Nun!”

Unrelated to Hethert-Nut, but of interest to me, Ra speaking to Geb:

“Take heed of your snakes which are in You! Behold, they feared me as long as I was there, but You know their magical power. Go then to the place where my father Nun is and tell him to keep watch over terrestrial and aquatic snakes. You are to write down each mound belonging to the snakes there, saying: ‘Beware of spoiling anything!’ They should know that I am here, for I am shining for them too. Now as for their habitation, it will exist in this land forever.”