After seeing some gorgeous posts on arranging sacred space, I wanted to do my second A post on my altar, my shrine, my own sacred space.

This is my shrine area, in the corner of my bedroom: 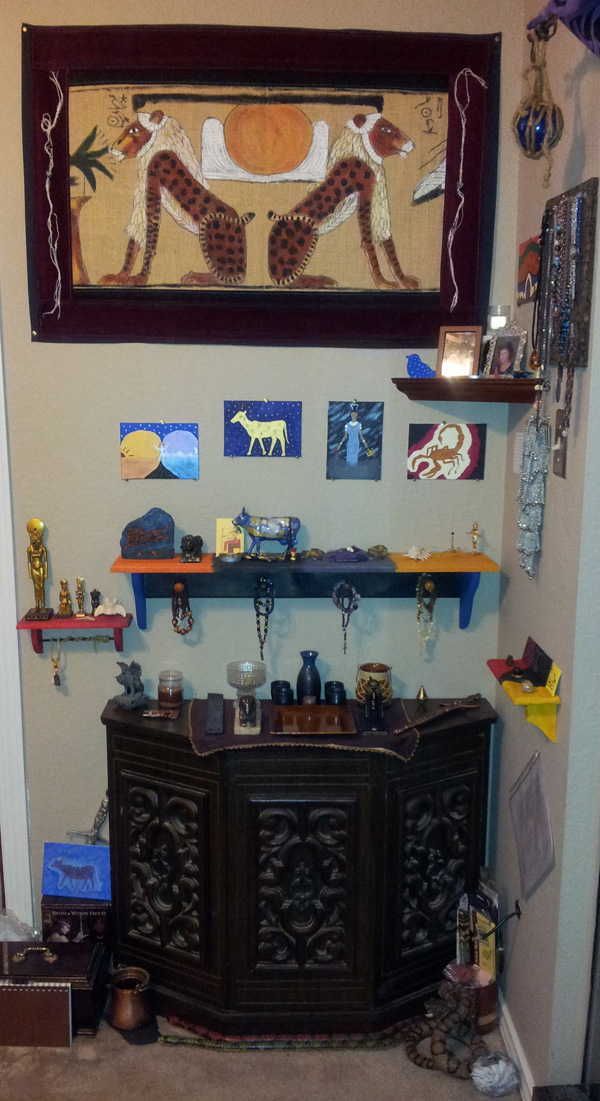 I have been told it’s colorful. >_> On the floor, you can see the wooden box that holds my tealights, the brown prayerbook leaning against it, and the metal container that holds my incense on the opposite side of the cabinet. The piece of paper pinned to the wall is my printed-out copy of the rite of Senut, a Kemetic Orthodoxy ritual. I also have two wooden snakes, one rattlesnake statue, a giant seashell, and my metal container (and heat-safe rock) for fire magic. Plus the first painting of Hethert-Nut I did.

The center of the shrine is a wooden cabinet that was my grandfather’s; it has two shelves inside of it, one of which holds my “extra” Kemetic icons (and several lion and snake statues) and the other of which holds my non-Kemetic pagan icons and treasures. Atop the cabinet is my main working space: 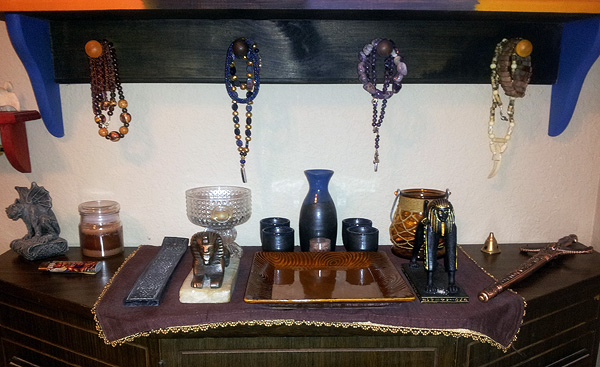 From left to right, you can see my protective gargoyle which I have had forever, a sandalwood candle, my Capricorn lighter (I am terrible with matches), my incense holder, a glass “chalice” that holds my tealights, a bronze casting of an Egyptian sphinx, my offering plate, my four offering cups and the pourer, a tiny stone container of natron right in front of the pourer, a golden glass container specifically for Ma’ahes and Serqet that holds another tealight, a Persian sphinx statue, a cone incense burner, and a copper-colored dagger styled with Egyptian imagery.

The four-colored shelf above the cabinet is for the gods of my divine family; I oil-painted the shelf in Their colors. From left to right, we have Ma’ahes, Hethert-Nut, Nebt-het, and Serqet; the order flows, especially when taking into account that Sekhmet’s shelf is to the left. From Sekhmet, Eye of Ra, we have Ma’ahes, also an Eye, and Hethert-Nut, Who is the sky and thus home to the Eye, then Nebt-het, Who is also a celestial Netjeru, then Serqet, Who is related to Nebt-het by virtue of also being a protective goddess. (The four Netjeru Who are usually hailed as protective funerary goddesses are Nebt-het, Nit, Aset, and Serqet.) 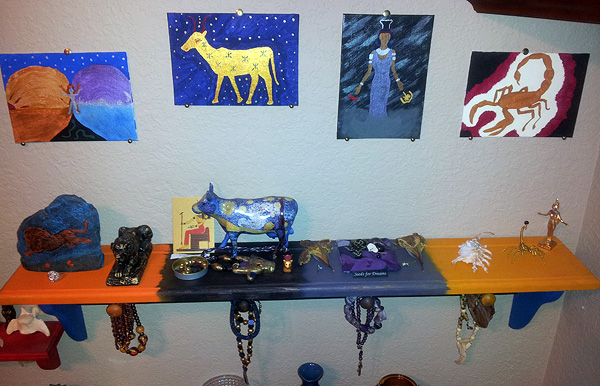 Hanging below each Netjeru’s portion of the shelf is a necklace I made for Them, plus a bracelet that I found and bought for Them. Above the shelf are paintings of and for each of Them, and on the shelf are various objects and icons. Ma’ahes has the silver lion’s-head ring I wear constantly, a leaping lion relief (not Egyptian), and a lying lion statue, made by Nicolas of Shadow of the Sphinx, who is a fabulously talented and kind artisan that I recommend to everyone. Hethert-Nut has an awful lot of shinies, including the starcow statue, a Hethert prayer card from a fellow Kemetic, yet another necklace with a cow pendant made out of Sculpey, a tiny Celestial Cow figurine (made by Mimafdet), and the leftover gold and night-sky beads from Her necklaces. Nebt-het has a variety of dried flowers, a buckwheat-seed “pillow,” a black bone ankh, a large amethyst stone, and a tiny amethyst earring; I wear the other earring of the pair. Serqet has a scorpion conch shell, a scorpion made of woven wire, and a lovely statue of Her human form, which was a gift from my sister.

To the left of the main shelf is my smaller shelf for Sekhmet, painted bright red: 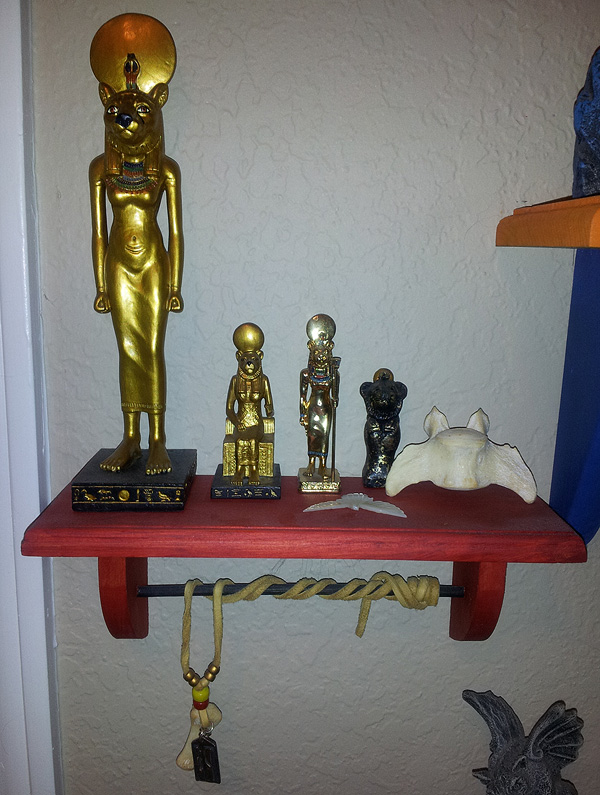 You can see several Sekhmet icons, most of which were gifts; the rightmost was made by Nicolas of Shadow of the Sphinx. There’s also a tiny white bird carved out of shell and a lion vertebra (obtained legally and ethically). Hanging from the bar of the shelf is a necklace that has Sekhmet’s name and another small lion bone.

To the right of the main shelf is a new installation for Set, Heru-wer, Yinepu, and Wepwawet:

Like the big shelf, I painted this according to Their colors, then offered stones (mahogany obsidian to Set, jet to the Jqls, and picture jasper to Heru-wer) and paintings of Their names in hieroglyphs. The Jqls also get a copper-and-pewter ring and two pennies.

In the corner, below the tapestry of Aker and above Serqet’s corner, is my akhu (ancestor) shrine: 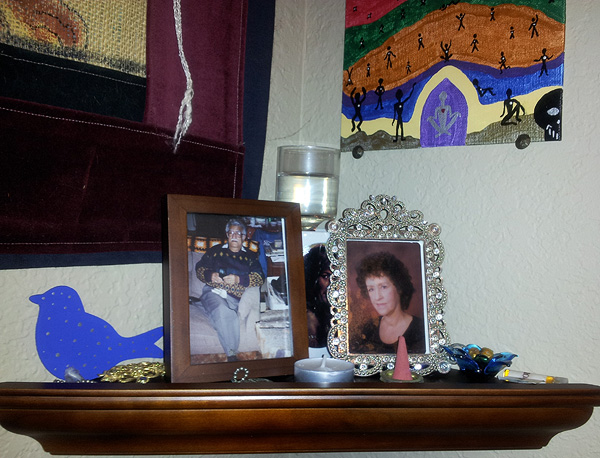 You can see photos of my dad’s dad and mom’s mom, as well as a white candle, cone incense, and behind the photos is a little glass of water, which rests in a coffee cup that was my grandma’s. You can also see a little wooden bird, painted blue with silver stars, and a necklace and pin that were my grandpa’s. Near Grama’s photo is a blue lotus-like glass flower with four golden freshwater pearl beads (from Hethert-Nut’s stash) and a wee vial of scented oil that reminds me of my grandpa’s house. There is, of course, the colorful akhu painting above the shelf and Grama’s silver flapper-ish purse hanging to the right of the shelf. Below the shelf is a hand-written prayer, which I read weekly while offering fresh water and lighting the candle and incense.

To the right of my akhu shrine, above the little shelf for Set and Heru-wer and the Jqls, is a corkboard that holds my religious and personal jewelry. I hung it all up for the purposes of this photo; on any given day, I’m wearing one or two bracelets, my watch, and 1-4 necklaces, though usually only two are visible on the outside of my shirt. 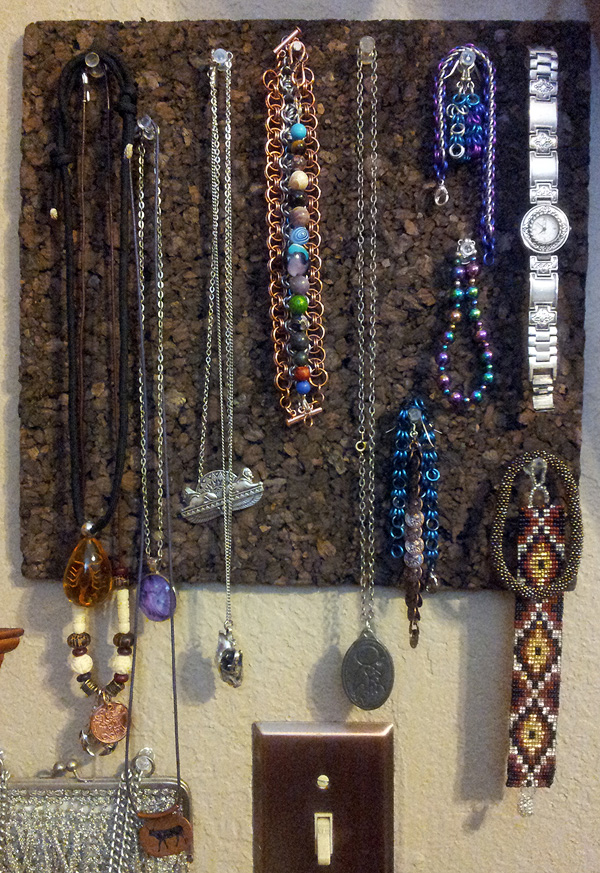 From left to right, we’ve got two necklaces for Serqet, one a scorpion in amber resin and the other one I made for us, featuring a sphinx medallion with a tiger’s-eye silver scorpion. Next are two necklaces for Hethert-Nut; the copper one was custom-made by Riv of PurpleShiny, and the round one is an image from the Orion Nebula. Next to those are two personal necklaces, one of twin sphinxes and the other of a lion skull cast in metal. To the right of those are two bracelets, a custom chainmaille bracelet woven by J. Koyanagi of Helix Chainmaille, and the akhu bracelet I made. Next to that is the pewter Sekhmet pendant I wear under my shirt; I’ve had it for years and years, a gift from another Sekhmet devotee. After that are a few more chainmaille creations: some singular earrings and a chainmaille bracelet for Hethert-Nut, plus a copper “coin” earring and a magnetic rainbowized hematite bracelet. Lastly, you’ve got my watch and two seed-bead bracelets (that I did not make).

I hope you’ve enjoyed this virtual, visual tour through my shrine! :)