Tonight is the Night Vigil for Wesir, the dead god, during His Mysteries.

From T. Siuda’s translation of the Lamentations of Aset (Isis) and Nebt-het (Nephthys):

Your two sisters join together Your limbs,
and no pain shall touch You.
We will make Your injury as if it never happened.
Great Mighty One among the gods,
the road You travel cannot be described.

From Faulkner’s translation of the Egyptian Book of the Dead, plate 36:

O my Lord who passes eternity repeatedly, he who shall endure everlastingly, Lord of Lords, King of Kings, Sovereign and Horus of Horuses. Those who have ever existed, behold, they are in your presence, namely those gods and men, you having made their seats preeminent in the God’s Domain, so that, assembled together, they might make supplication to your Ka, those who come in millions and millions, reaching and mooring with you. And they who are in the womb, they too have their faces towards you, for a tarrying in the Beloved Land shall never happen. Cause that they all come to you, the great as well as the small.

I took a bit of catfish from my partner’s dinner plate and squirreled it away with a piece of crabcake from my own meal, wrapping them both in a napkin and tucking it into my shirt pocket. When he didn’t bat an eye or remark on my seafood hoarding, I laughed. “It’s for Treading the Fishes,” I told him, and he made the ohhh of recognition. For a non-Kemetic, he’s pretty savvy.

Treading the Fishes is a multi-day festival that celebrates recurring fertility and kingship; lasting from III Shomu 19 (Monday) to III Shomu 23 (Friday), it involves the king treading on dried fish, hence the name. Stomping the fish is symbolic of conquering isfet (uncreation), but also ties into the cyclical fertility of the land, as the fish are buried to provide nutrients to the soil for the next growing season. The king would also re-dedicate herself to her nation of Kemet and offer the Heqa sceptor, a symbol of rulership, to Khnum, the Netjeru Who makes the each human on His potter’s wheel.

So I took my tiny bit of fishes out to our little garden-like section near the front door and dug a shallow pit, then tucked the food, now wrapped inside a folded paper, into the soil. I covered the packet with fresh dirt, watered it with pure water (to help the paper start decomposing), and gave it a good couple stomps; I am certainly no king or representative of one, but I am happy to participate in symbolically refertilizing the earth and helping ensure the next good growing season. The act of setting aside some bounty to fuel and welcome the next surge of abundance feels very important to me, not to mention useful and applicable in many different areas of life.

On the paper that held the now-dried fish, I had written a little heka:

As the land provides for me,
so I provide for the land in what ways I can;
as Netjer provides for me,
so I offer to Netjer in what ways I can.
I give back part of what I receive
to open the way for abundance.
Dua Wesir and Set, Who dance the cycle
of green growth and fallow rest,
both equal in the eyes of Ma’at!
Dua Geb, Who encompasses both crest and trough,
Who makes us mortals live with His gifts! 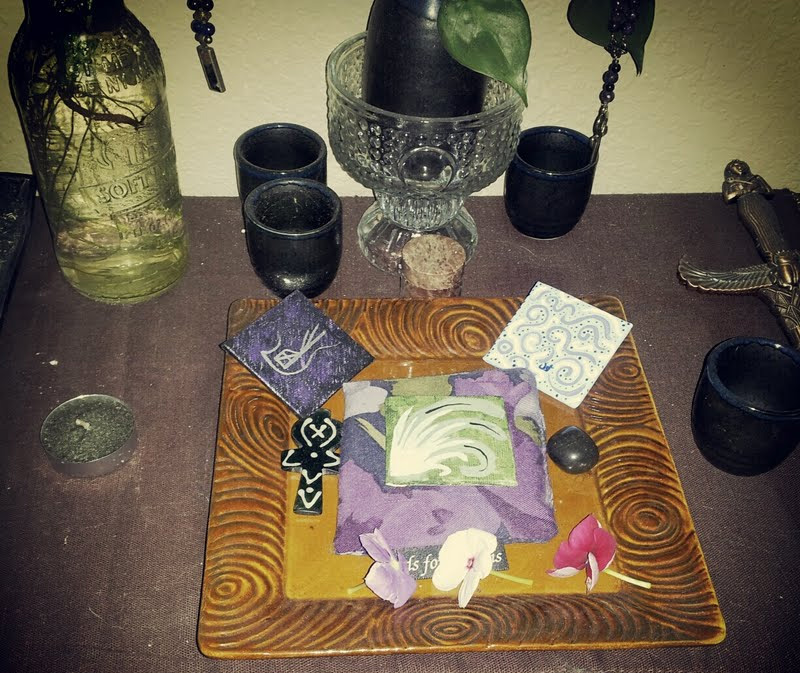 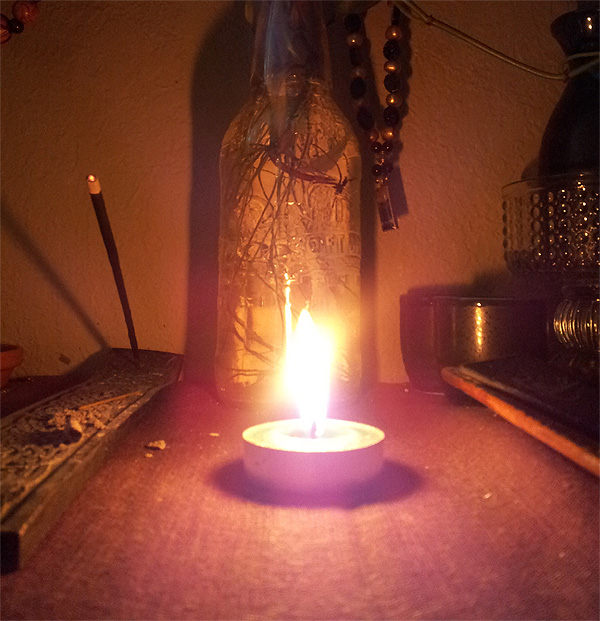 We are in the middle of a five-day Kemetic holiday called the Mysteries of Wesir (Osiris). In short, it is an observance of Wesir’s death, the lamentation of the Netjeru Who love Him, and His emergence into the realm of the dead. It is one of the most foundational holidays to Kemetic Orthodoxy.

I have been formally Kemetic for only about a year and a half; I’ve been pagan for a decade. This celebration of death, especially timed at the seasons’ change, is very familiar to me. In some ways, my own cycles mirror the dying and hibernation of the world. But I hadn’t really celebrated the Mysteries before.

Last night, ideally, one would hold a six-hour vigil from midnight to dawn, with prayers and offerings on each hour; the experience of sitting in shrine is a loyal witness to Wesir’s loss and His transition into the Duat, the Unseen, the otherworld where the dead are. Hemet, Kemetic Orthodoxy founder, has written some beautiful words on the night-long vigil.

But I work a dayjob, and I could not last until dawn. So I compromised and chose a one-hour vigil from 11 pm to midnight.

No electronics. No food; no water. None of my sacred jewelry or accoutrements. Just me and death, stretched out in front of the fire in the hearth.

I had a tiny shrine set up: a purple seed-filled “pillow”, about the size of a palm, from Nebt-het’s shrine, on which rested the green sigil I painted for Wesir at Wep Ronpet, as though She laid Him in Her own bed to watch over Him. Standing vigil were Her black bone ankh and Yinepu’s onyx stone. And I had a bowl of clear, pure water set next to it all.

It was the water that gave me the insight I had been seeking, even though I didn’t know why I’d set it out at all, beyond listening to that wordless urge of “this should be done” that so often drives my offerings. I lay down on the floor, my chin on my hands, and I saw the firelight reflected in the water’s still surface perfectly.

I have been struggling to understand Wesir; how can a god be dead, yet still have human worshippers and devotees? How can He be as gone from us as gone can be, gone like my father’s father and my mother’s mother, and yet still bless us and speak with us?

The water was the answer. Just because the flames were not housed in the bowl into which I gazed did not mean that the flames did not exist and burn somewhere else, a little farther from me but still visible nonetheless.

I understand so much better now.

I wrote out the translations of the Lamentations of Aset and Nebt-het then, by hand; it took me most of the hour. I savored each line, following the story closely: They start by calling for Him to return, then reciting the things They have done to protect and re-establish Him, then end by welcoming Him as the god of the dead. When I was done, I read it aloud, quietly.

In the middle of this, almost exactly the middle of the hour, the fire went out. I’d gotten absorbed by my writing and hadn’t fed it quickly enough; I added a few smaller sticks, turned the gas back on to help relight it from the still-glowing embers, and waited.

Then, after a few long moments, it flared up spectacularly. I finished writing out the Lamentations by its flickering light.

Today is Wesir’s birthday, the first of the epagomenal days, five days that fall between the end of the Kemetic year and Wep Ronpet, the Kemetic New Year on August 3rd.

Hail to the Once-Living King,
sacrificed by His brother
so that He may lead the beloved dead.

May You bless this coming year
as You blessed Aset with Your son;
the year stands strong in ma’at as Heru does.

Green as the dancing rushes,
as fertile as the flooding Nile,
Dua Wesir, the Lord of Life!

In Wesir’s honor, the tiniest sigil I have ever painted – it is for growth.

with a candleflame like a tooth
from the jaw of some almighty being
I hail You, in praise, in respect.

thank You for keeping
the dead that we love.

may the olive-green of tea
be Your color in my mind
and may every drink of it I take
cool You and refresh You.

hail to the bull in His cavern
and the green man in the West.